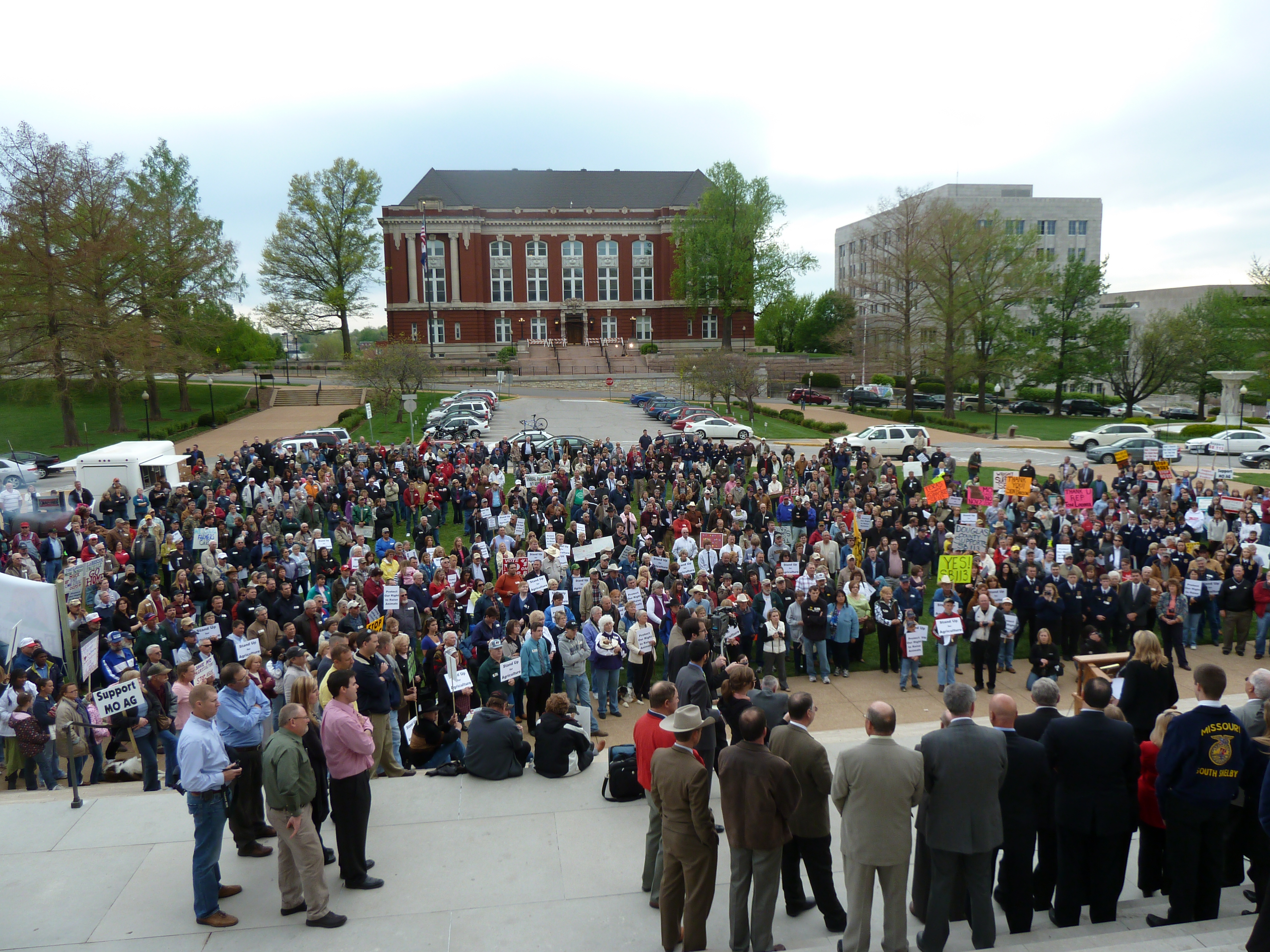 JEFFERSON CITY - Dog-breeding legislation stemming from last November's Proposition B brought advocates on both sides of the debate to Missouri's Capitol Wednesday to voice their opinions on the both the restriction-repealing legislation and the recent compromise proposed by Gov. Jay Nixon.

The governor called his compromise the "Missouri solution," which he backed in response to legislation that would repeal parts of Proposition B. Nixon said his compromise is between dog breeders and animal welfare advocates; it would eliminate restrictions on the number of breeding dogs and increase the enforcement of breeding laws. The governor has yet to take any action on the repeal bill lawmakers sent to his desk last week.

About a hundred members of animal advocacy groups, such as the Humane Society of the United States and the Best Friends Animal Society, met outside the Governor's Mansion to protest Nixon's compromise. During the rally, the protesters chanted up and down the street, shouting "Veto 113" and "Keep your paws off our laws."

"We believe that the word of the voters should be respected," said Dane Waters, director of ballot campaigns for the Humane Society of the United States. "We want Prop. B, and we want it intact."

Waters said the protesters wanted Nixon to veto the Senate bill, but that they were "cautiously optimistic" about the chances of Nixon taking this action. Waters also said HSUS was willing to listen to the proposals for compromise, but they were never asked to take part in any discussion.

One of the protesters and owner of an animal shelter, Marilyn Hughes, discussed the condition of the animals that come out of large breeding operations.

"The condition of these animals is hideous," Hughes said. "They come out matted with feces in their hair and come out dripping in urine."

While the animal welfare advocates met down the street, a group several times the size of the dog breeders and agriculture advocates, assembled on the Capitol's steps to show their support for the compromise.

At the rally, Jon Hagler, the director of the Department of Agriculture, said he had traveled the state with Nixon and supported Nixon's compromise to the dog-breeding controversy.

The day after he presented the compromise to dog-breeding legislation, Nixon received a letter from more than 60 members of both chambers. The letter included statements from the repeal bill's sponsor, Sen. Mike Parson, R-Bolivar, that thanked Nixon for his efforts and urged him to sign the bill that passed out of the statehouse last week.

Nixon released a statement Tuesday evening in response to the letter, saying, "This public statement by a broad coalition of legislative leaders is a significant step forward for our Missouri solution.”

Rep. John McCaherty, R-High Ridge, voted to overturn Proposition B when it was on the House floor. Although he's for the compromise, he said he did not appreciate the timing.

"Personally, I wish this would have happened weeks ago," McCaherty said. "And [that] both sides would have come to the table then, instead of after we passed the legislation."

Sen. Brian Munzlinger, R-Williamstown, the chair of the Senate Agriculture Committee, agreed with McCaherty about the compromise's timing and said he was concerned with the time crunch lawmakers will have passing it.

"This Missouri solution is going to be a rush to get it through, but I think one thing the governor needs to do first is sign Senate bill 113," Munzlinger said.

Munzlinger attended the pro-compromise rally and criticized the HSUS for being an "anti-agriculture organization" that "misleads the populace with pictures of abused puppies and kittens."

Barbara Schmitz, the Missouri state director of the HSUS, said she was disappointed in the compromise.

"We think that it falls short of what the voters approved last November. ... We have concerns because we don't think it provides as many protections as we would like for the dogs that are provided under Proposition B," Schmitz said. "Our laws and regulations for 18 years were pretty weak and inadequate."

Rep. Margo McNeil, D-St. Louis County, said her constituents haven't spoken out against the compromise to her just yet, but she said they weren't fond of the repeal legislation.

"I don't think that my voters are going to be pleased to see the compromised version any better than they were the original bill that came through," McNeil said.